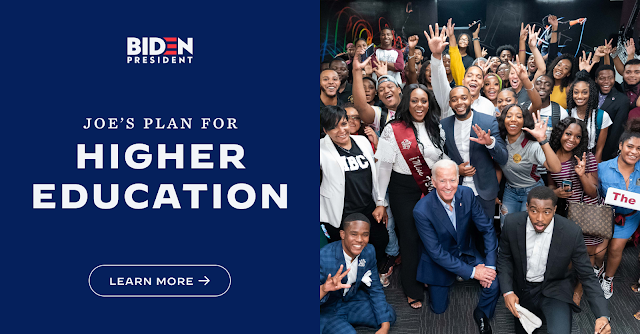 If you paid off a student loan recently, maybe you should have waited since incoming President Joe Biden may cancel billions of dollars in outstanding student debt.
After the coronavirus outbreak last April, Biden, then the apparent Democratic presidential nominee, announced a new plan to cancel at least $10,000 in student debt for borrowers below a certain income threshold. That was a nod to liberal Democrats such as Bernie Sanders and Elizabeth Warren, who favor more generous student debt forgiveness. Now that Biden has won the White House, education groups and consumer advocates are pressing Biden to honor his promise and up the ante, by canceling up to $50,000 in student debt soon after he becomes president next year.
About 45 million Americans hold a student loan, with student debt in the United States totaling $1.5 trillion. The average loan per student is more than $30,000. Some of those loans are private deals between borrowers and banks, which the government can’t easily change. But nearly 90% of all debt is federally authorized, and some legal experts think the president can cancel those loans by executive order, with no legislation required.
The rationale for canceling student debt is to help struggling borrowers who can’t get ahead because their debt burdens are too high especially those who took out loans but never finished college and don’t have the degree that’s supposed to help them earn more money. Some advocates favor income caps that would exclude borrowers from wealthier families and target the aid to those who need it most.
But student debt forgiveness is controversial, and pushback is forming now that Biden will finally be in a position to cancel some loans. Here are 4 problems with the idea:
It’s expensive. Biden wouldn’t cancel the entire $1.5 trillion in student debt, but if he forgave just one-fifth of that, the total would be $300 billion, which is a big number in federal budget terms. Biden says he’d reverse a tax cut in the CARES Act, passed last March, to help pay for it, but getting Congress to pass a de facto tax hike is likely to be very difficult, especially since Biden’s Democrats will either be the minority party in the Senate or hold a one-seat majority. Passing a tax hike might be easier once the coronavirus recession is long past, but it seems very unlikely within the next year or two. The Biden administration would probably just borrow to cover the cost, pushing up the national debt.
It barely helps the economy. This might be counterintuitive, since an individual freed from $10,000 of debt might experience welcome and newfound financial freedom. But forgiving debt does a lot less for the economy than putting money directly in people’s pockets, since it doesn’t provide new money to spend and the savings typically come over a long period of time. The Committee for a Responsible Federal Budget estimates that forgiving all $1.5 trillion in debt would only provide a stimulus effect to the economy of $360 billion, at best.
Other forms of stimulus, such as enhanced unemployment benefits or direct aid to cities and states, would have three to four times that effect on the economy, in terms of stimulating new output. Many economists agree that canceling student debt provides poor bang for the buck, including prominent Democrats such as Jason Furman, who served as President Obama’s chief economist.
There’s a fairness problem. Biden would probably couch student aid forgiveness as an emergency response to the coronavirus recession, meant to help people who might otherwise be doing okay if businesses weren’t forced to close or stop hiring. But there’s still an inequity between people with lucky timing who, say, just graduated and would have most or all of their debt forgiven, and others who have paid off some or all of their loans and would benefit less. Biden could try to formulate a plan with some sort of proportionality, but caveats would complicate the program and make it less effective.
The what-next issue. Would Biden forgive a fixed amount of debt at a single point in time and then leave it at that? He could. But forgiving student debt once would create a precedent to do it again, and some advocates, such as Bernie Sanders, want the government to cover the total cost of college for some or most students, forever. If so, all these problems would persist and some future borrowers might take out loans they can’t afford hoping the government will cancel them.
Despite these drawbacks, it seems likely Biden will pursue at least some student debt relief. Democrats can plausibly argue that if Republicans can cut taxes for the wealthy as they did in 2017 then surely it’s fair to give students and young workers a break, as well. It could also be good politics for Biden, since many student borrowers struggling the most are lower-income minorities Democrats want by their side in the 2022 midterm elections and future races beyond that.
Biden will need heads of the Treasury and Education departments willing to implement these plans. Treasury is important because the IRS, part of Treasury, normally treats forgiven debt as income. That would be counterproductive, so student-debt cancellation would have to come with a special provision directing the IRS to waive taxes on the benefit.
Former Federal Reserve Chair Janet Yellen Biden’s nominee for Treasury Secretary hasn’t taken a stance on student debt forgiveness. But in a 2014 speech as Fed chair, she did highlight the surge in student debt during the prior decade, and the disproportionate burden the rising cost of college puts on lower-income families. Like Biden, she too may come around to the idea of forgiving student loans.
Newer Post Older Post Home